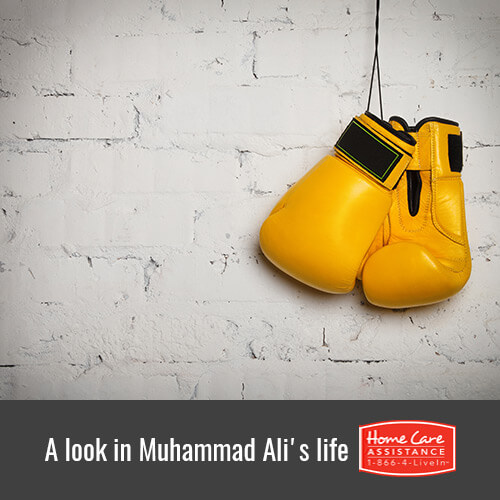 When Muhammad Ali developed Parkinson’s disease, he accepted the challenge without fear. His determination and his efforts in support of the Parkinson’s community will forever be remembered and appreciated. The Toronto Parkinson’s care professionals at Home Care Assistance discuss some of the great achievements Ali made while living with Parkinson’s.

Ali made a huge sacrifice by disclosing his medical condition to the world. However, his ultimate sacrifice was traveling the world to raise awareness and become a humanitarian, which caused him to miss out on precious time with his children. One of his daughters, Rasheda, stated she was angry with him when she was younger, but once she became older she was proud of the difference his efforts made.

He Maintained a Positive Outlook

Ali was a champion inside and outside the boxing ring. His wife and children said he never once complained about having Parkinson’s, regardless of how difficult his days were. He told crowds at events and people at his Parkinson Center that no one loses in life. Instead, people learn to move on. This philosophy helped him remain positive while living with Parkinson’s.

It should come as no surprise Ali remained physically active even after being diagnosed with Parkinson’s. During the first 15 years of living with the disease, Ali continued to work out 5 times per week. He also received the massage therapy he needed for his medical condition, which strengthened his muscles and increased blood flow to his limbs. Maintaining good health is what allowed Ali to fight against Parkinson’s for as long as he did.

He Fought for Others with the Disease

Ali was upset people around the world did not have access to high-quality care, and his opinion did not change after he was diagnosed with Parkinson’s disease. In fact, his desire to fight for high-quality Parkinson’s care increased. Ali not only went around the world speaking out against this issue, but he also established AliCare and the Muhammad Ali Parkinson Center. Both organizations have helped people receive access to treatment and information regarding their illnesses, among other benefits.

Muhammad Ali showed great strength in the face of Parkinson’s, but he couldn’t have done it without the help of others. If your elderly loved one needs help managing Parkinson’s symptoms, turn to Home Care Assistance. Our dedicated caregivers are available around the clock to assist with important daily tasks and help your loved one live a happier and healthier life. To learn more about senior care Toronto, ON, families can count on, call one of our experienced Care Managers at (416) 488-8777 to schedule a no-obligation consultation.