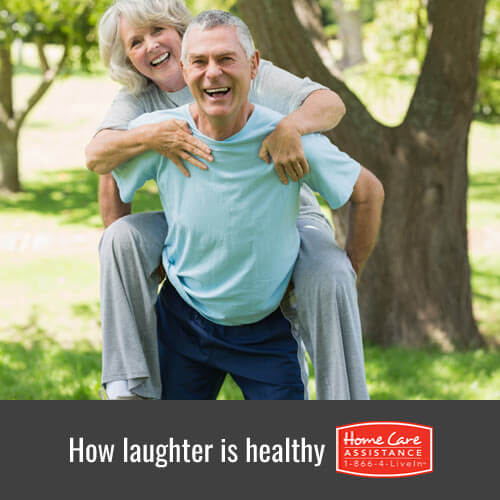 It turns out laughter may truly be the best medicine after all. While laughing can’t cure serious ailments, a growing body of research has found there are very real and significant health benefits to laughter. As a leading provider of home care in Toronto, we know first hand the importance of maintaining a sense of humor and share these measurable benefits of a good chuckle.

1. It works better than antipsychotics for dementia patients.

A study conducted by the University of New South Wales found that laughter may be better than medicine for seniors with dementia. Researchers found that dementia patients in a nursing home who visited with a humor therapist regularly had 20 percent lower agitation levels than those who received standard care, which includes antipsychotic medication. Even better, laughter has none of the potentially dangerous side effects of prescription antipsychotics.

2. The body responds to repetitious laughter the same as exercise.

An interesting study presented at the Experimental Biology Conference in 2010 found that repetitious laughter actually causes the body to respond in almost the same way as it does to moderate exercise. According to researchers, mirthful laughter boosts the immune system, reduces stress hormones, improves mood, lowers blood pressure, and boosts good cholesterol levels.

Numerous studies have confirmed that laughter is good for heart health. It’s also one of the fastest and easiest ways to lower blood pressure. In one recent study, middle-aged and elderly men and women were assigned to a control group, laughter group, or music group. After three months, individuals in the music and laughter groups saw blood pressure significantly reduced by 5-6 mmHg.

The connection between laughter and mood is incredibly complex, although researchers have made plenty of connections between the two. For example, one study of depressed seniors found that those who were able to show a sense of humor were more likely to improve. People who are stressed out–but have a great sense of humor–are also less likely to remain depressed or anxious than people who don’t laugh as often. Laughter can be described as a way to “remember” how to be happy by tricking the brain into a new “default” state.

Discover new ways to promote your elderly loved one’s health and wellbeing by reaching out to Home Care Assistance. Our hourly and live-in senior care in Toronto is ideal for seniors who require non-medical assistance with everyday tasks like cooking, cleaning, and running errands, as well as seniors who could benefit from medication reminders or around-the-clock safety monitoring. Give us a call at (416) 488-8777 and speak with a friendly Care Manager to learn more.