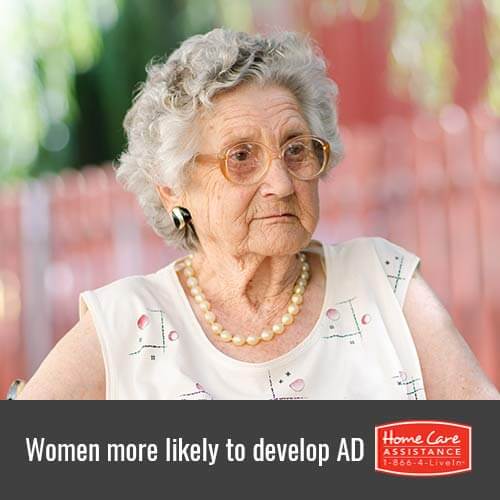 All is not equal between the sexes when it comes to memory loss. Long-term studies have shown that there is a higher incident of Alzheimer’s among women. The fact is that the majority of Alzheimer’s patients are female and no one knows for sure why. Scientists are trying to unlock the mystery of why women are more susceptible to AD than their male counterparts.

Scientists around the world are working hard to find the answers to the Alzheimer’s dilemma. They do know that women who are showing signs of mild cognitive impairment, or MCI, which involves memory and thinking skills, decline twice as quickly as men. Most MCI patients continue to live independently for many years, but there is a risk of developing Alzheimer’s as the cognitive abilities continue to deteriorate.

Amyloid plaque in the brain has long been associated with Alzheimer’s disease. Amyloid plaques are a brain abnormality of sticky protein buildup that accumulates outside nerve cells within the brain. This protein divides improperly and creates beta amyloids that are toxic to brain neurons. A recent study found that women have more beta amyloids in their brains than men of the same age with similar cognitive levels.

There is a significant biological difference in the structure of a man’s and woman’s brain and body, which may be an indicator as to why women are more at risk of developing Alzheimer’s during their lifetime. Women also go through many different types of hormonal changes as they age. Biological differences are currently being studied as a reason for the wide gap in the gender Alzheimer’s numbers.

Women are losing the battle to Alzheimer’s at a faster rate than men, and while progress is being made, much is left to be done in the race to find a cure. If your aging loved one has been diagnosed with Alzheimer’s and wishes to age in place, reach out to Home Care Assistance, the leading home care agency in Toronto.

We utilize the revolutionary Cognitive Therapeutics Method in all of our care services to help seniors with memory impairment regain a sense of accomplishment and slow cognitive decline. For more information on CTM or any of our care services, including live-in, respite, and part-time senior home care, call a dedicated Care Manager at (416) 488-8777. We’re here to help, 24 hours a day, 7 days a week.